Why ARoglyph is not a social network

From time to time we hear the question of “how is your offering different from social networks like Facebook or Twitter”. Here’s the answer in an easy to understand form. 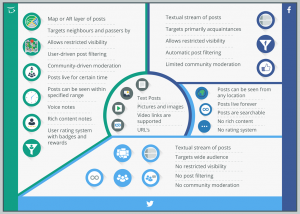 New feature request – Set a category for the mark

There’s a new idea submitted to the Idea List for ARoglyph.

The idea offers to let users choose a category from the hierarchical list of predefined categories, and to be able to filter marks by category.

If you like the idea, you are welcome to vote for the idea here.

This is a short note to let you know that our development team is quickly approaching the release stage.

We previously published (but didn’t announce) the public Alpha version for Android. Currently we have a stable version available for download from Google Play.

There were internal debates in our team about whether we need to make an iOS version of the application from the very start or leave it for later. We used some spare resources and iOS version of the ARoglyph client is currently being developed quite fast.

We are Allied Bits Ltd. (20-22 Wenlock Road, N1 7GU London, United Kingdom). You may proceed to the site if you are considered legally capable of using services online under your national law, or you are at least 13 (USA) or 16 (EU) years old. We do not collect your personal data intentionally and use only irretrievably anonymized information about the interaction with the site. All information is stored on the servers, located in the European Union or in states concerning which an appropriate adequacy decision has been adopted (namely, Canada). An adequacy decision, if adopted by the appropriate authority of the EU, points out that the state in question provides the GDPR-approved level of protection.. Please, find out more in our Privacy and Personal Data Protection Policy (effective as of 28/02/2019) Ok, I agreeCookies Policy